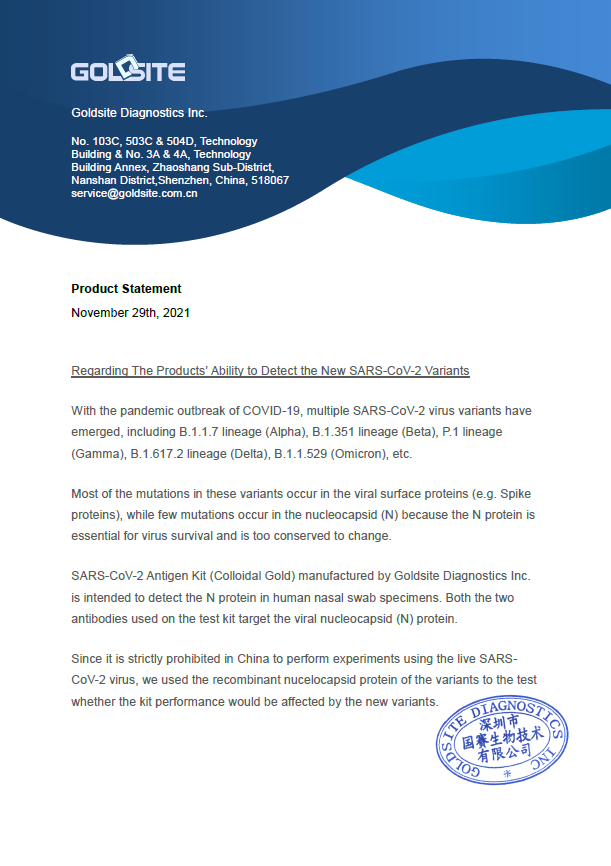 Regarding SARS-COV-2 Antigen Kit (Colloidal Gold), The Ability to detect the new SARS-CoV-2 variants of concern

Most of the mutations in these variants occur in the viral surface proteins (e.g. Spike proteins), while few mutations occur in the nucleocapsid (N) because the N protein is essential for virus survival and is too conserved to change.

Since it is strictly prohibited in China to perform experiments using the live SARS-CoV-2 virus, we used the recombinant nucelocapsid protein of the variants to the test whether the kit performance would be affected by the new variants.

The recombinant nucleocapsid protein (NP) (wild type, delta version, omicron version) of the SARS-CoV-2 was serially diluted with the extraction buffer, to make a series of dilutions with final test concentration shown below. 70 μL of the dilutions was added directly for testing. All dilutions were tested in triplicates. The results were as follows:

*The limit of detection (LoD) of the test has previously been determined to be 2.5 ng/mL using the wild type NP.

The preliminary results showed that the test has the same sensitivity (limit of detection, LoD) when detecting the wild-type, the delta variant, and the omicron variant's nucelocapsid proteins, which were 2.5 ng/mL.

Based on preliminary testing results above and the comparison analysis, we hereby declared that SARS-CoV-2 Antigen Kit (Colloidal Gold) performs the same (i.e. no impact) when detecting the SARS-CoV-2 variants including but not limited to the following variants (next page).

Vairants including but not limited to the above ones can be detected by SARS-CoV-2 Antigen (Colloidal Gold).

Goldsite Diagnostics Inc. will continue to monitor the impact of the circulating variants on the performance of the kit.